Kekionga, Miamitown, Three Rivers, The Portage and Fort Wayne are names given by the Indians, the French, the British, and finally the Americans. There is a book Five Forts by John Ankenbruck, 1972, The News Publishing Co., Fort Wayne, Indiana 48601.

Five forts were built all located within a square mile of the center of the current city of Fort Wayne. The current fort is a replica of the 1815 "Whistler's Fort." The reason for the first fort was to protect the fur trade.

Fort Wayne’s first fort was built as a dream of the French, and especially the renowned 17th century explorer Robert Sieur de La Salle, to create a wilderness empire that arced through the Great Lakes and the Mississippi River valley from Quebec to New Orleans. Is the first sentence of the First Fort of the Fort by Tom Castaldi, local historian posted October 9, 2014 on History Center Notes & Queries blog. Site of the last French Fort erected in 1750 has a historical marker and a photo was posted May 30, 2022 on True Fort Wayne Indiana History on Facebook. See Google Map Street View. It is Stop #54 The Second French Fort Audio: “Second French Fort” featuring Tom Castaldi Courtesy of 89.1 WBOI on the Kekionga Trail 11 stops on the Heritage Trail by ARCH ( Architecture and Community Heritage). Have you ever taken the pleasant drive north on St. Joseph Boulevard along its name-sake river? As you pass the intersection of St. Joseph Street, you are at the site of the second French fort of the mid 1700s once known as Fort St. Joseph. is the first sentence starting the Second Fort from French to British by Tom Castaldi, local historian posted November 13, 2014 on History Center Notes & Queries blog. Fort Miami (Indiana) at Wikipedia, The Free Encyclopedia. 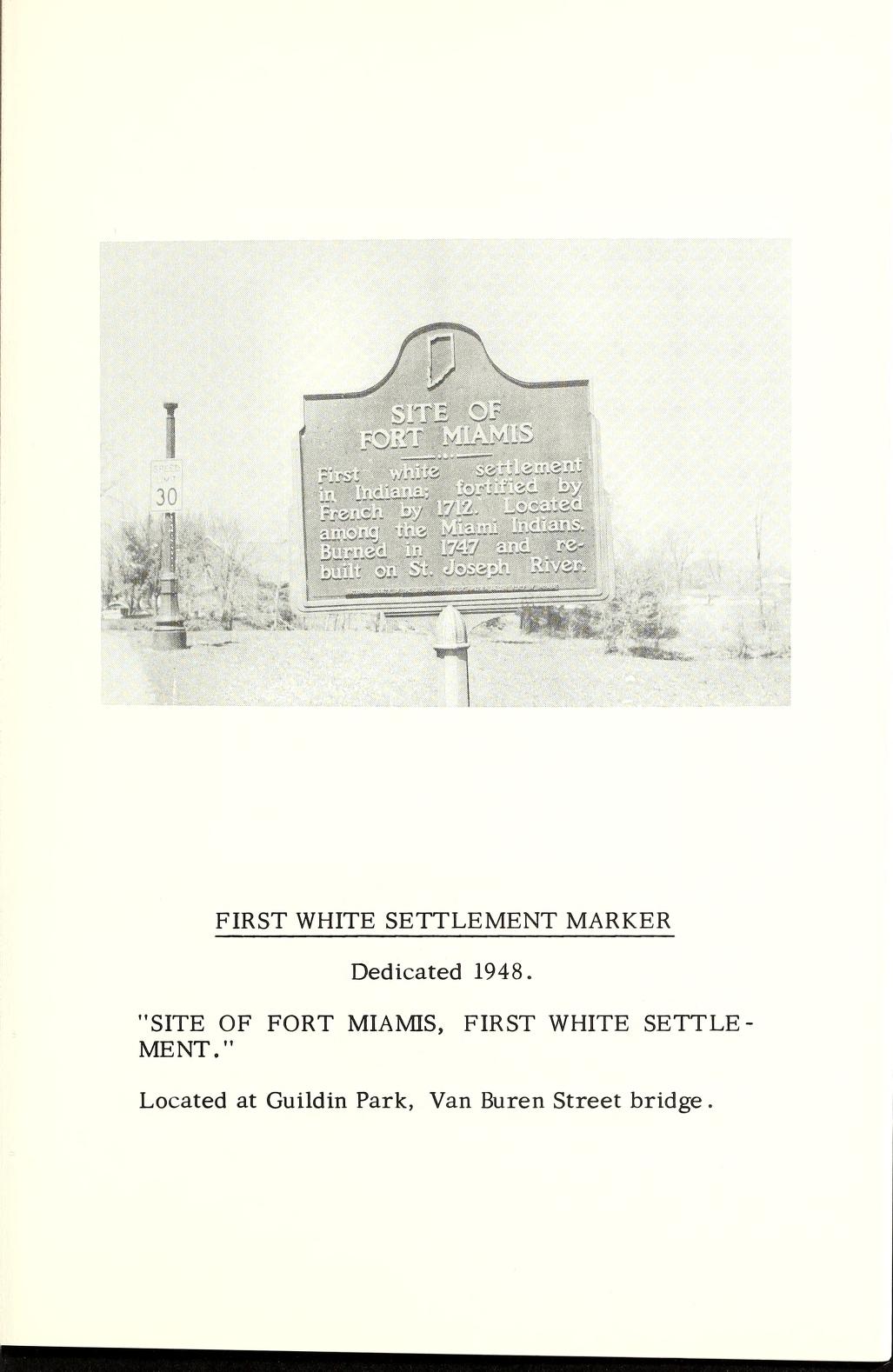 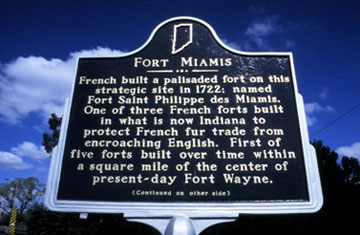 French built a palisaded fort on this strategic site in 1722; named Fort Saint Philippe des Miamis. One of three French forts built in what is now Indiana to protect French fur trade from encroaching English. First of five forts built over time within a square mile of the center of present-day Fort Wayne.

The modern Historic Old Fort has a page with events, photos and information on the City of Fort Wayne Parks & Recreation website.

October 22, 1794 Fort Wayne was dedicated. Following General Anthony Wayne's victory at the Battle of Fallen Timbers, the Legion of the United States under Wayne's command moved into present-day Indiana. Wayne selected a site for a fort at the Miami town of Kekionga. The site was strategically and militarily located at the confluence of the St. Joseph, St. Marys, and Maumee rivers. Wayne sought to exert American influence and control in the region over the claims of indigenous peoples and the British. Major John F. Hamtramck was placed in command of 100 soldiers stationed at the fort. Learn more about Fort Wayne here: Anthony Wayne’s fort by ARCH ( Architecture and Community Heritage) which includes a location map from page 138 of Griswold's Pictorial History of Fort Wayne, Indiana. An October 22, 2018 post by Indiana Historical Bureau on Facebook included the image above that shows "A Reproduction of the Only Existing Original Drawing of Old Fort Wayne Made by Major Whistler in 1816" on page 156 in Griswold's book. See Fort Wayne Facts on City of Fort Wayne and October 22, 2015 post by Indiana Bicentennial Commission on Facebook. Gen. Anthony Wayne helped the nation grow west by Richard Battin published January 24, 1994 in The News-Sentinel newspaper.

The French and British at Three Rivers by Public Library of Fort Wayne and Allen County, 1952, an Archive.org.

The fort at the three rivers by Snow, Dorothea J., 1909-, Publication date 1968, an Archive.org.
FOREWORD In May, 1964, Pi Chapter of Psi Iota Xi Sorority made a challenge grant to the Allen County Fort Wayne Historical Society to research the historical data necessary to build an accurate reconstruction of the Old Fort. The grant was to be used, in part, to employ research scholars, to prepare and publish their findings and to bring to Fort Wayne for the first time a documented account of her earliest history. The resulting body of documents and source materials is now housed in the Historical Museum. It is on this Psi Ote Collection that Dorothea Snow has based her book, an accurate account of early Fort Wayne, written as a gift to the children of our city. Pi Chapter of Psi Iota Xi believes that bringing to life the story of the beginning of this community is as important a contribution as we could make to our fellow citizens. We are honored, therefore, to present Miss Snow's book to this and all future generations. We are proud to have had a part in preserving and bringing to our children their heritage.

Diary of Captain John Cooke, 1794 Allen County-Fort Wayne Historical Society, 1953, an Archive.org. The Foreword states: Primary source materials relating to General Wayne's sojourn at Fort Wayne are scarce. Extracts from the diary of one of his captains were published in the Fort Wayne Gazette eighty years ago.

Was located on East Main Street at Clay Street. The Wabash & Erie Canal was built in the 1830s replaced in the 1850s with railroad tracks that run along the north side of the park. The Old Fort Well was dedicated September 12, 1960 on what is the remaining park. The downtown Main Street Firestation # 1 is just west of this location. There are several photos at the Allen County Community Album such as the Old Fort Park, 1941, Spanish Cannon original site - Clay and Main (Old Fort Park), Spanish Cannon in Old Fort Park, Railroads, Fort Wayne IN: looking west from Old Fort Park, showing Union Pacific car, piles of culverts inside, Railroads, Fort WayneIN: looking west from Clay Street next ot Old Fort Park, showing tracks, cars, switch , and plaque of the old fort along the river on Old Fort Wayne on pedestal in Harman Park that held statue of Anthony Wayne - 1973 . Several recent photos of the wishing well were posted August 6, 2017 and the 1941 photo of the park was discussed March 31, 2019 on You are positively from Fort Wayne, if you remember... Private group on Facebook.

Historic Fort Wayne - Where History Comes to Life published May 22, 2013 by HistoricFortWayne on YouTube
Historic Fort Wayne....we make history come to life. You can spend 12 years reading about history in school, but unless you see it in person you will never really understand the hardships, the lifes, the triumphs, and just what it was really like back in the days of old. And so that is our mission here at Historic Fort Wayne...to bring history to life! That is why nearly every event is free (except for a free will donation) because we want people to learn all they can!

Reconstructed fort on Spy Run Avenue near downtown Fort Wayne across the St. Marys River from Headwaters Park. The History page on their web site: oldfortwayne.org briefly describes the various forts built near the three rivers. The bottom section titled The Reconstructed Fort states: This project began in 1964 when Historic Fort Wayne Inc. was established and started planning a reconstruction of the Fort, using Major Whistler’s 1814 drawings. After much fundraising, they purchased property in the late 1960’s and sought a fort builder. Lok-N-Logs Inc., a log home company in Sherburne, New York, took on the unusual project, constructing the Fort first in New York, then transporting it to Indiana, where it was reassembled. It officially opened shortly before July 4, 1976, to celebrate the nation’s Bicentennial, and remained open daily until the early 1990’s. Historic Fort Wayne Inc. disbanded in 1989, and the current Historic Fort Wayne, Inc. was formed in 2004 as a volunteer effort to preserve the Fort. Though they share a name, the two groups are not connected. Construction of the fort re-creation began in the summer of 1975. Work on the replica was not finished for its dedication June 5, 1976, but several hundred people turned out for the festivities. See the articles Historic Fort Wayne and Old Fort Wayne – Learn History In Person! by Louisa D. published June 8, 2015 on Visit Fort Wayne. See photos on Throwback Thursday: Old Fort published August 31, 2017 on The Journal Gazette newspaper. See their Facebook page - INFortWayne.com YouTube Bicentennial Celebration at Historic Fort Wayne. See photos and discussion January 17, 2017 on You are positively from Fort Wayne, if you remember... Private group on Facebook. 360 virtual photo tour on vpix.net. Photos of Old Fort Wishing Well posted August 6, 2017 and 1896 Fort Wayne watch fob photo discussed August 7, 2017 on You are positively from Fort Wayne, if you remember... Private group on Facebook.