1105 Cass Street, went out of buisness June 10, 1967. It was a consolidation of Consumers, Moran (started in 1860 using horse drawn wagons), and Centlivre ice companies. Home ice delivery was discussed February 24, 2017 and a photo of a July 7, 1967 The Journal Gazette newspaperarticle was posted and discussed September 24, 2017 on You are positively from Fort Wayne, if you remember... Private group on Facebook. See images of ice delivery items from the 1800s and early 1900s posted June 21, 2018 by The History Centeron Facebook.

Was located at 3651 North Clinton Street in Fort Wayne, Indiana. The site occupied approximately 4.5 acres and was situated in a predominantly commercial and residential area. South of the large Glenbrook shopping mall. Four buildings were located on the site. The facility, formerly known as Hanchar Industrial Waste Management and Continental Waste Systems, began operations in 1980 as a waste recovery and reclamation facility, handling waste oils and solvents along with other hazardous wastes. On September 9, 1986, a chemical fire broke out at the site. The local fire department and Hazardous Materials Response Team extinguished the blaze which narrowly missed igniting approximately 525 drums of hazardous materials in an adjoining room. The City then asked for and was granted a restraining order against IJ Recycling, closing the facility. See the I. Jones Recycling, Inc Settlement Released for Public Comment: March 2004 on IN.gov. They’re moving a lot of dirt at 3705 N. Clinton, and by early next year the property just south of Glenbrook should be home to the CarMax store Indiana. CarMax, based in Richmond, VA., was founded in 1999 and operates about 195 locations, including Indianapolis and Merrillville, and had sales of more than $17 billion in 2017. A Fortune 500 company, CarMax has an extensive on-line presence and plans to erect a 7,600-square-foot facility on the former I.J. Recycling site. Copied from KEVIN LEININGER: Site of major 1986 fire finally redeveloped; trail and Fire Department concerns exposed published May 11, 2019 in The News-Sentinel newspaper.

Discussed May 12, 2017 on You are positively from Fort Wayne, if you remember... Private group on Facebook.

Several were in the Fort Wayne area. Mentioned in a 1904 Fort Wayne News newspaper article posted May 1, 2017 onthe original Great Memories and History of Fort Wayne, Indiana page on Facebook.

Old time pet store, feed mill, and seed seller was downtown. Discussed October 24, 2017 on You are positively from Fort Wayne, if you remember... Private group on Facebook.

A photo of an etching hand signed by Blake Hughes of the Administration Building at Indiana Institute of Technology erected in 1852 was posted May 31, 2018 for "Throwback Thursday" by Hofer and Davis, Inc. Land Surveyors on Facebook.

Over 300 copies of this quarterly publication are on Internet Archive.

Incorporated in 1896, owned by John Claus Peters, it was located corner of Osage and West Main from Comments posted when a photo of their stone crushing machine was posted and discussed August 3, 2018 then more photos and discussion August 4, 2018 on You are positively from Fort Wayne, if you remember... Private group on Facebook.

A 60 acre property bounded by the Hicksville State Road (now State Street Blvd), Thomasetta (now Kentucky Ave), Charlotte and Parnell Avenues then out in the country in 1890. By the 1920’s the property housed about 1,600 patients as well as operating nearly 1,000 acres of farmland in Allen County including the property that is now the campus of Purdue and Indiana Universities on Coliseum Blvd. From photo and history by Randy Harter, Fort Wayne historian and author, posted May, 4, 2017 on Fort Wayne Reader then posted May 8, 2017 and May 6, 2018 on You are positively from Fort Wayne, if you remember... Private group on Facebook. Aka "State School" now Northside Park on State Blvd near North Side High School.

Now called Navistar, construction began in 1922 at the intersection of East Pontiac and Bueter Road. Production began in 1923 and a milestone was reached at the plant forty years later in 1963 when the one-millionth truck, a semi-tractor, rolled off the assembly line. September 28, 1982 on the front page of The Journal Gazette newspaperHarvester announced it would shut the Fort Wayne plant laying off 2,100 workers. Early in 1979, 10,600 people worked for Harvester. The engineering and parts distribution center would remain with about 2,000 employed in 1984. The city assembled a $31 million aid package for the 60-year-old local plant compared to the $27.6 million package offered for the 17-year-old successful Springfield, Ohio facility.The last truck rolled off Fort Wayne assembly line July 15, 1983. See photos on Throwback Thursday: July 15, 1983 – Last truck rolls off line at Harvester plant published June 29, 2017 in The Journal Gazette newspaper.

This video of the 1960's International Scout was posted and discussed August 21, 2018 on You are positively from Fort Wayne, if you remember... Private group on Facebook 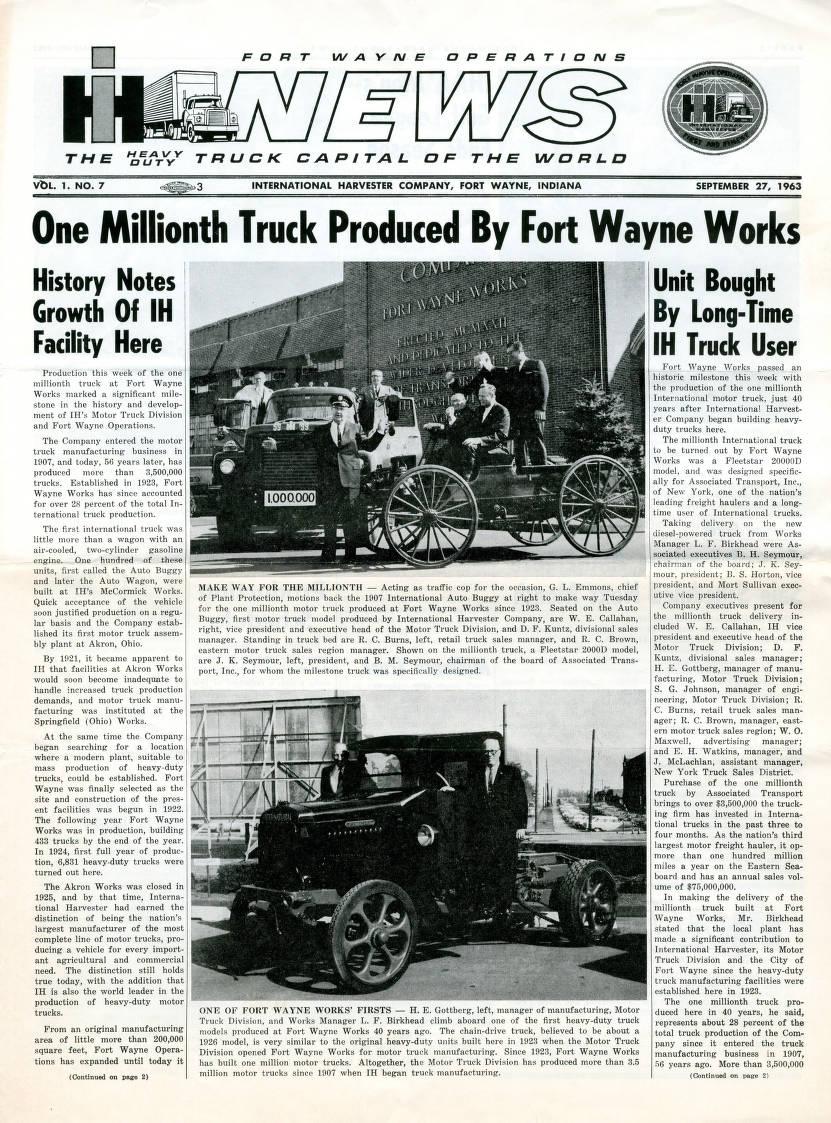 Includes the Wayback Machine that archives web sites no longer online. The company has been archiving Public Domain pre-1923 books from the Allen County Public Libraryand The Genealogy Center for many years then placed online at archive.org. Many of our links go to archived web pages on the Wayback Machines and local history books archived on Internet Archive are found embeded in some of our pages.

Started in 1906. Discussed July 15, 2015 on You know you've lived in Fort Wayne too long when... Private Facebook group. See the Steel towers removed Friday with video by Kevin Kilbane published September 1, 2015 on The News-Sentinel newspaper. See multi-part Waynedale News articles by Jack Stark - Boom and Bust June 20, 2007, July 4, 2007, Part III July 18, 2007, Part V August 8, 2007, Part VII August 22, 2007, Part VI September 5, 2007, Part VII September 19, 2007, Part VII October 3, 2007. Building was a freight station in Fort Wayne Interurban lines, similar to railroads, carried freight, too, though they were obviously more limited in their capacity by Tim Ashley published February 25, 2016 in The Elkhart Truth. 20+ photos and discussion February 4, 2017 on You are positively from Fort Wayne, if you remember... Private group on Facebook. DEVELOPMENT OF INTERURBANS IN INDIANA by HIATT, FRED B. Publication date 1909-09-01 in The Indiana Quarterly Magazine of History on Internet Archive. The last day of service was February 19, 1952. Indiana & Michigan Co.'s interurban rail service had its last run. The locomotives had provided freight service between I & M and the city filtration plant, the Fort Wayne State School and Centlivre Brewery. The line had been in service since 1906 and was the last remaining interurban rail line in the state. Copied from THIS DAY IN HISTORY: February 19 in photos published February 19, 2018 by The News-Sentinel newspaper. Trolley Yard/North Side High School/Centlivre Brewery 1927 photo and article by Randy Harter, Fort Wayne historian and author, published March 16, 2018 in Fort Wayne Reader. Trolley yards were discussed March 18, 2018 with more photos of a trolley March 18, 2018 and found in a general Interurban search on You are positively from Fort Wayne, if you remember... Private group on Facebook. More information under Transfer Corner.

The Interurban-Its Boom and Bust was presented by Jack F. Stark for the Fort Wayne Quest Club on February 17, 1984, then reprinted in segments in The Waynedale News.com.

Founded in 1892, closed August 31, 2014. Constructed some of the city’s most prominent buildings including the Embassy Theatre; the Fort Wayne Water Treatment Plant; the former Waterfield/Wolf & Dessauer/Lincoln Financial building now known as Citizens Square; North Side, Bishop Luers and Paul Harding high schools; projects at Trine University and the University of Saint Francis; the Mizpah Shrine; the (former) GTE building; and many buildings and expansions at and around St. Joseph, Lutheran and Parkview hospitals. From Irmscher built to last Contractor on Embassy, many major projects, closes by Linda Lipp published September 12, 2014 in Greater Fort Wayne Business Weekly.