Ca. 1960 with photo. The roughly eight block long East State Village is made up of approximately 20 commercial properties largely developed during the city’s trolley era in the 1920’s. Starts the July 11, 2017 post by Randy Harter, Fort Wayne historian and author, You are positively from Fort Wayne, if you remember... Private group on Facebook. 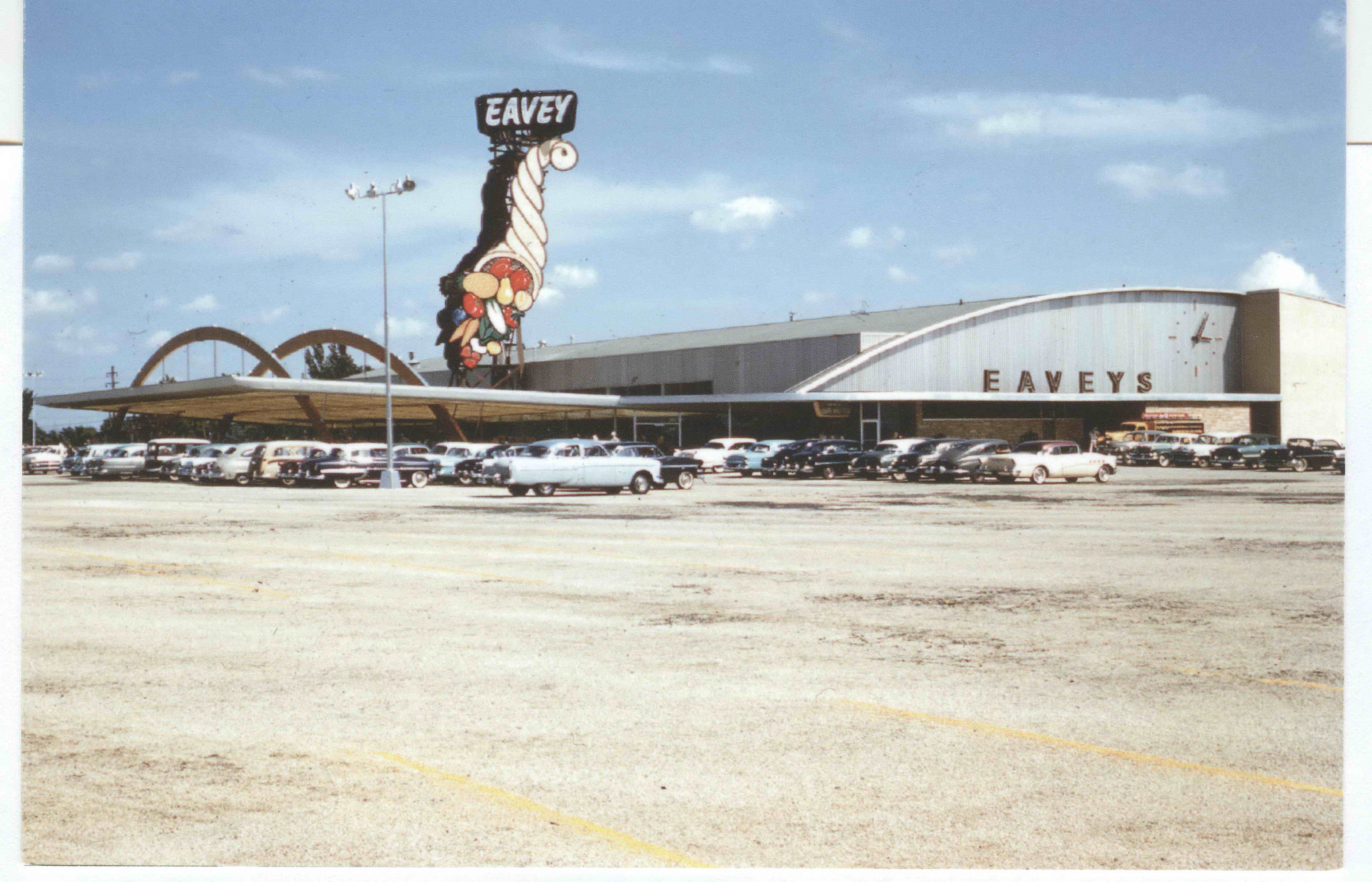 A local landmark opened July 31, 1956, at 5300 Decatur Road, with the longest clear-span, monochord trusses ever used in any building in the world supporting the roof. The July 1958 Indiana Business Magazine featured Henry J. Eavey's flagship store in Fort Wayne. At 80,761 square feet, with a selling area of 50,250 square feet, it was the largest supermarket in the world at the time. Dan Vance photo caption stated: 1956 - The Eavey's Supermarket on Decatur Road, opening July 31, 1956, has been called the world's largest, with 80,761 square feet. it has a selling area of 50,250 square feet. One of its king-sized features is the 70-foot cornucopia holding the sign at the north end of the building. shown in the photo posted in THIS DAY IN HISTORY: July 27 in photos published July 27, 2018 in The News-Sentinel newspaper. The store was owned by Scott Foods, then bought by Kroger, who closed the store February 14, 2009, which then faced demolition until a new owner bought it in 2013 for warehousing.

1915 West Main is a grand 1900 Free Classic home owned by Henry E. Eckart, general manager and secretary-treasurer of the Fred Eckart Packing Co., a mammoth meat-processing company deeply woven into the neighborhood’s history. Its plant and stockyards at 1825 W. Main St. – the remaining building lost in a fire in 1998 after changing hands – employed hundreds after the company was founded in 1877 by Henry Eckart’s father, Frederick Eckart, an immigrant from Bavaria, Germany. Copied from A house with a history Meatpacker’s mansion draws dad, daughter June 2, 2013 by Rosa Salter Rodriguez of The Journal Gazette newspaper. See June 13, 2013 photo for home tour by ARCH ( Architecture and Community Heritage)on Facebook.

Peter Eckrich, an immigrant from Waldsee, German arrived in America at the age of 17. He launched a meat market in 1894 Fort Wayne. He created and sold sausage varieties he enjoyed growing up in Germany. By 1907 he was wholesaling meat, then incorporated as Peter Eckrich & Sons in 1925. They ceased retail by 1932, operating exclusively as a wholesale meat vendor. By 1932, Eckrich meats were nationally recognized for their great taste and supreme quality. Peter died in 1942. In the 1960s-1970s, Peter Eckrich & Sons heavily advertised during local sporting events including high school basketball, baseball, and Komets hockey. Eckrich was sold to publicly owned Beatrice Foods of Chicago in 1972 merged into Swift and Sons in 1986 as Swift-Eckrich. The Fort Wayne plant closed in the mid-1980s. In 1990 they were sold to ConAgra, then October 2, 2006 sold to Smithfield Foods which in 2013 became privately owned by a Chinese company. 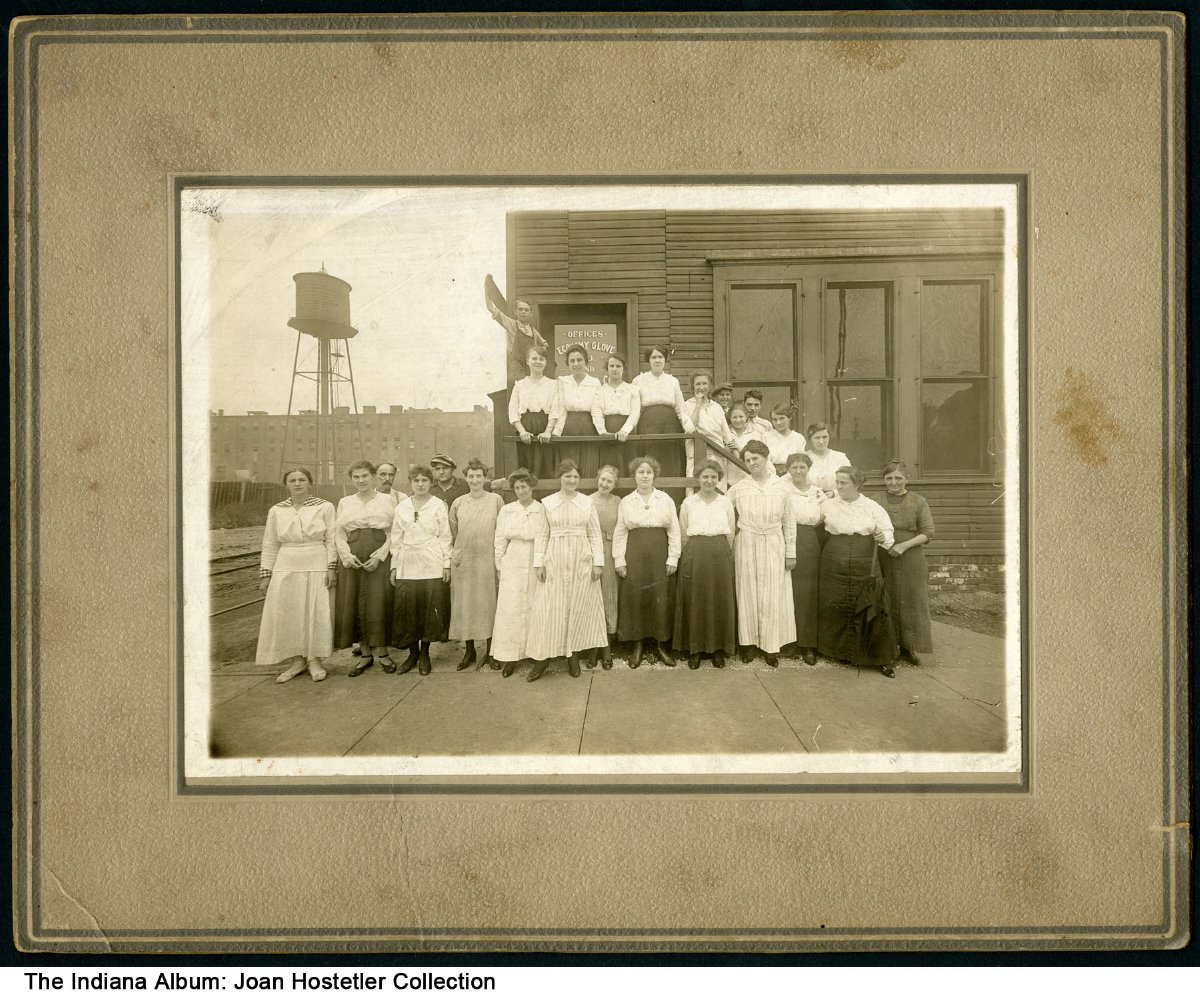 Wallace and Barr Streets circa 1902-1920. The photo at right of women workers outside the business was posted with the description:  A 1902 edition of The American Hatter magazine reported that the business was about to open in Fort Wayne and would employ 50 people. By 1907, they employed 100 women and 5 men. The factory manufactured canvas work gloves, underwear, and mittens, and was in business at least through 1921. on The Indiana Album, Joan Hostetler Collection. The photo was posted and discussed January 26, 2019 on You are positively from Fort Wayne, if you remember... Private group on Facebook. One comment said the factory at Barr & Wallace Streets was destroyed by fire February 4, 1920 from an article in the February 5, 1920 The News-Sentinel newspaper.

Circa 1975 - 2017 305 West Main Street - February 16, 2017 photo and discussion on Daniel Baker Facebook page. See Edsall House endured many changes by Michael Hawfield published November 2, 1993 in the archives of The News-Sentinel newspaper and Edsall House by ARCH ( Architecture and Community Heritage).

The Electric Works complex is along Broadway Avenue south of downtown containing more than 1.2 million square feet in 18 historic General Electric buildings on 39 acres. For history see our General Electric history or current status go to their web site fortwayneelectricworks.com. A photo of a flag posted July 4, 2019 by Electric Works on Facebook states once the “Biggest Flag in Indiana.” The photo is of Monument Flag in 1898. “Superintendent Edward Barnes decided that the Fort Wayne Electric Works should display the flag in a striking manner. He constructed a flagpole 120 feet high in the mold of the masts of English racing yachts. ...The pole carried a flag which was 32 feet, 6 inches wide by 54 feet, 6 inches long. Happy Independence Day, America! Quote from General Electric of Fort Wayne, Indiana, A 110 Year History by Clovis E. Linkous. Published in 1994.

Founded in 1954 by Cecil and Juanita Ellis. Ellis Funeral owner Juanita Ellis crosses over at 83 by Frost Editor published April 20, 2015 on Frost Illustrated.


Saving the Embassy part 1 published May 27, 2011 by Embassy1928 on YouTube
Faced with the wrecking ball in 1972, a handful of community leaders and volunteers led by Robert Goldstine, banded together to form the Embassy Theatre Foundation. This is their story.

Saving the Embassy part 2 published May 27, 2011 by Embassy1928 on YouTube
Faced with the wrecking ball in 1972, a handful of community leaders and volunteers led by Robert Goldstine, banded together to form the Embassy Theatre Foundation. This is their story.

The Embassy Theatre is an individual listing on the National Register of Historic Places. Designed by Alvin M. Strauss. The Embassy Theatre opened May 14, 1928 as the Emboyd Theatre, was restored in the 1990s recreating the original carpet, lace curtains, and light fixtures. Read more of their history on their About Us web page. See more local Theaters such as the Clyde Theatre, Embassy Theatre, Holiday Theater, Jefferson Theatre, Palace Theatre, Rialto Theatre, and Paramount Theatre.

A Romanesque Revival style fire house designed by the architectural firm of Wing & Mahurin. With arched doorways and stall openings in brick, and a stone belt course above a row of brick dentils on the main façade. In its day, it was the largest and best-equipped fire station in town, also served as a testing site for new equipment and firefighting methods. Last used as a fire station in 1972. It currently houses the Fort Wayne Firefighter’s Museum and the Old No. 3 Firehouse Café.

A number of business explosions have occured over the years. July 12, 2017, October 26, 2017 discussions on explosion near Glenbrook Mall regarding Hansen Barrels, Hanchar Recycling, Gladiux refinery in the 1980s and Explosion Search on You are positively from Fort Wayne, if you remember... Private group on Facebook. The Library of Congress photo

William G. Ewing's house on the northwest corner of Berry and Ewing Streets was built in 1838. The three-story brick mansion was considered to be one of the finest examples of Greek Revival architecture in Fort Wayne. In April 1948, the home was purchased for $57,000 by the Fort Wayne-Allen County chapter of the American Red Cross from then-owners Dr. and Mrs. Don F. Cameron. The building housed several commercial tenants, and the Red Cross planned to move all its operations and activities, including the community blood center, into the site about a year later. Copied from This Day in History April 12 in photos published April 12, 2018 by The News-Sentinel newspaper. 1854 Initial Construction photos and some information at the Library of Congress Historic American Buildings Survey, Engineering Record, Landscapes Survey. The Library of Congress photos posted April 6, 2019 on You are positively from Fort Wayne, if you remember... Private group on Facebook.

Where the Allen County government started in a log tavern of Alexander Ewing off Columbia Street at the muddy intersection of Columbia and Barr streets in 1824. No longer there, it would now be the backyard of the Fort Wayne Civic Theatre and Fort Wayne Museum of Art. The Ewing Tavern site is at stop #19 The Beginnings of Fort Wayne on the ARCH ( Architecture and Community Heritage) Central Downtown Trail.